A trusted team, backed by four generations of family ownership, is why customers have been calling on A.J. Allen for more than 80 years. 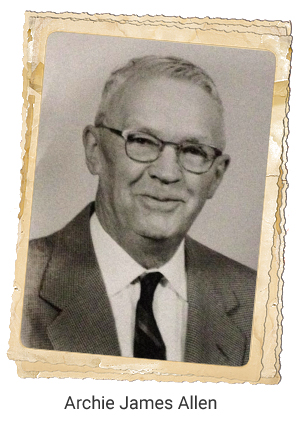 Archie James Allen and his brother Lester, founded the Allen Brother Plumbing and Heating Company in 1932. Archie and Lester did much of the original work on Camp Dodge, including the outdoor swimming pool which was then the world’s largest pool.

In the early 1940’s, Lester left the company and Archie changed the name to A.J. Allen Plumbing and Heating Company. Archie’s first large job was to build the Naval Air Station in Ottumwa, IA which was commissioned March 3, 1943.

“There’s really only one way to do a job and that’s to do it right. We’ve built a reputation in Iowa as a company that can do the job right every time. We offer all of our clients a professional staff, quality workmanship and experienced management.”

Other large facilities they built in the late 40’s and early 50’s were the Firestone Tire & Rubber Company, Lucas State Office Building and Veterans Memorial Auditorium. The company office was located at 6th and Keo Way until 1962 when the building was razed for construction of the American Republic Insurance Co. The Allen brothers built their new facility at 25 Dunham Avenue where they remained until 2000 when the Indianola Avenue by-pass was constructed and forced them to move to their present offices at 320 SE 6th Street.

Jack Allen retired from the company in 1967. The company incorporated and officially became A.J. Allen Mechanical Contractors, Inc., choosing to retain the name and reputation built by Archie in the early part of the century.

Bill’s son Ed joined the company in 1971, followed by his other son Mark in 1975. Three years later Dick retired, leaving the company in the capable hands of Bill and his sons, Ed and Mark. Bill continued to work until his death in 2001.

Mark Allen is the company President and Ed Allen serves as Treasurer and Secretary. Three of Ed and Mark’s sons, the fourth generation of Allens, also work for the company.